Alex Deans is an 18-year-old inventor, artist, and speaker. When he was 12-years-old he invented a device that helps the blind get around without assistance. Since then, he has been named “future leader” by Maclean’s and has spoken at We Days across Canada. A few days ago I had the chance to hop on the phone with him and ask him a few questions about his experiences. 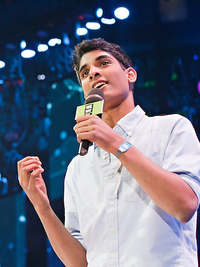 So the iAid is based off how a bat navigates using sound. There are two different systems for the iAid, one is for indoors and one is for outdoors. Indoors the device uses four sensors on your belt, and it essentially scans your room using sound and it maps out where all your obstacles are and where your destination is. The iAid then actually plans a route to your destination automatically, and all that information is relayed back to you through a little joystick that I built. You hold this joystick in your hand and it will actually rotate by itself to show you where to go.

Yes, there were two main obstacles that I faced when developing the iAid. One was learning to code at such a young age and teaching myself from scratch, and that took me three years. Once I reached out onto the forums and online, there were a lot of people who said I couldn’t do it, especially since I was 12. Not a lot of people are willing to back a 12-year old with such a big idea. So it took me about a year and a half to find those people who support me and mentor me and I worked with them over the next couple of years too.

It feels amazing! I first had the excitement last year at We Day 2014 and that is definitely one of the main reasons why I came back in 2015, and because it is so fulfilling for me to speak with people I can relate with, people who are actually making real change. Really what I am trying to do is have a conversation with you guys, with people in the audience, to have an open dialogue. Not to just have that stop at the end of We Day, to have that continue throughout the year so we can work together to make big changes, and that is what I love the most about We Day.

One thing I really want to change is how Aboriginal people are treated in Canada. That’s actually something I am really passionate about, and it is something I am started to get involved with more and more. I am working on creating an equal playing field level for Aboriginal youth and Aboriginal education. I want to see them have access to the same things that we do.

5. Who is someone whose leadership inspires you?

My role model as leader would probably be Bryan Stevenson. He is a lawyer in the states who advocates fully for people who are marginalized and who nobody else is backing, and he backs them. He gives them supports and advocates for them, and I find that to be really powerful.

Yes, We Day speakers are people who have a lot of experience, but they are also the same people who are in the audience. To get onto the We Day stage, all you have to do is follow your ideas, pursue those dreams and make them happen, have some tangible experience with your idea and then you will be able to  share that experience with people regardless of whether that is on the We Day stage or not. I think the main thing is just to pursue your idea and make it happen, and them some crazy, wonderful things can come from that. For me, it was speaking on the We Day stage but for a lot of other people it is just maybe speaking to do different organizations or maybe becoming involved with a certain group. There are a lot of different avenues that your experiences can lead to.

I don’t have a specific motto but mine would just be “If you have a dream, chase it,” because no matter what it is in life I like to make sure I devote 100%of my attention to that dream or idea I have and make it happen.

There are a lot of things I like to do. I am really passionate about visual arts, so I love to paint especially portraiture. I also really music so I play piano and guitar and I sing, so I do that as a kind of release. I really enjoy playing sports, especially skiing. I live for skiing, I started when I was two years old and it has become something that I really love to do.

Thank you Alex for letting me interview you!

1 thought on “My Interview with Alex Deans!”