On Friday September 21st, 2018, thousands of students across Ontario walked out of their classrooms in protest of the Ford government’s decision to revert the 2015 sex ed curriculum back to what it was in 1998. 17-year-old Rayne Fisher-Quann decided to take action and raise her voice about the harm that this decision could cause. She was able to rally more than 40 000 students to leave class to show the government, that we, the students, demand change and do not consent to this decision. I had the chance to chat with Rayne about her experiences and goals for the future.

Diviya: Can you tell me a bit about yourself and how you first got involved in politics and activism?

Rayne: “I’m 17 and in Grade 12 and I think I’ve always really tried to be involved with activism and to be politically active. I think that’s something that I think everyone can do, which is in itself a form of activism. It’s just being educated and knowing what’s going on, knowing what’s happening with politics. That’s something that I’ve always tried to do and something I think all young people can do as a form of activism. But obviously when I really started getting involved in politics was this summer and that was kind of when I made the switch. I had always been the person who went to rallies but never did any of my own stuff but then when Doug Ford changed the sex ed curriculum and the Indigenous curriculum it really affected me. Obviously it’s something I care about so much and that kind of inspired me to do that protest because he wasn’t listening to the students and I didn’t see any other young people speaking up at the time so I decided to do it, and obviously it was something that so many people really did care about.”

Diviya: Why do you think that it is so important for youth in our country to receive proper sex education?

Rayne: “I think that there’s a lot of answers to that. I think that kind of the amazing thing about the 2015 sex ed curriculum was that it had something for everybody. I think everybody in our province had a stake in the sex ed curriculum, whether they knew it or not. I think that the education that a generation of children receives absolutely will affect the state of the entire province even for generations, like the education that hundreds of thousands of children receive even for a few years will completely change the way that our province turns out. It’s so important, especially living in 2018, and living in the world that we live in. Our children need to be educated about all of the issues that concern modern society, and it’s so important that people know about consent and that people know about gender identity, even if that’s the issue that affects them personally. Even if it’s a straight, white, male guy who probably isn’t personally affected by knowing about gender identity or knowing about LGBTQ issues, it’s so important that everybody grows up to be tolerant and grows up to be respectful. Knowing those issues can make such a difference in how our most vulnerable groups in this province are treated.” 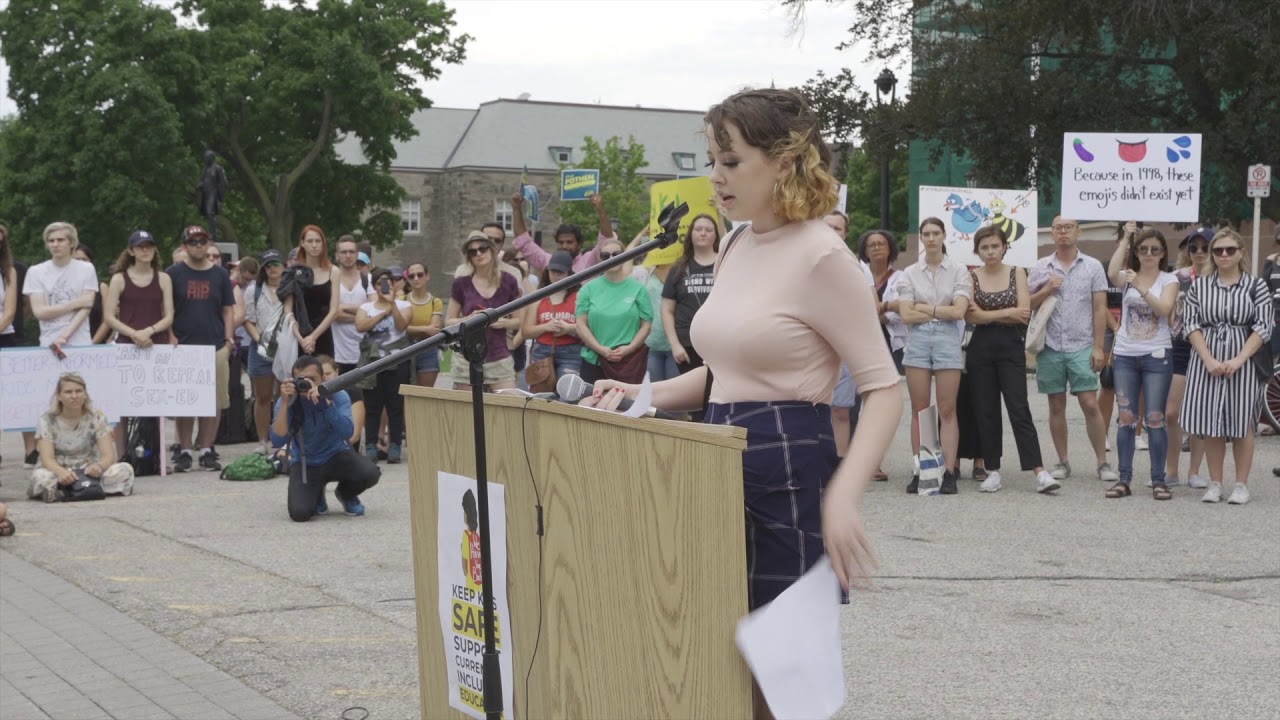 Diviya: What do you think is the importance of proper sex ed in educating young boys with regards to consent and rape, especially given what is currently happening in the US with the Kavanaugh hearing?

Rayne: “Yeah, obviously that’s something I’ve been following really closely. It’s also a particular issue that I’ve spoken out about and has a lot of relevance to myself. Something that I’ve talked a lot about in the media is my own experiences with sexual assault and sexual harassment and how for me almost daily I’m sexually harassed and how I’ve been sexually assaulted just by strangers in public many, many times. A lot of the time I think if any of those men and received an education and consent or had learned how to take no for an answer or learned how to pick up those signs, that probably wouldn’t be my experience and it probably wouldn’t be the experience of so many thousands of girls and even millions of girls around the world. I’ve talked to so many people who have said that before that curriculum, they couldn’t define consent. It’s so hard to exercise that autonomy if you can’t put words to it, if you don’t know that there are laws in place and you don’t know that this concept exists. Being able to put words to it and put words to a feeling is so important to be able to exercise that autonomy to yourself. It’s also so important for men to be aware of that concept too because again there’s there’s just so many guys who just honestly didn’t know that having sex with a drunk girl constitutes a breach of consent. There’s so many people who just didn’t learn that and there’s so many other cases where an education would have made such a difference.”

Diviya: How did it feel on the day of the walkout to see thousands of youth standing up for their rights alongside you?

Rayne: “It was definitely super overwhelming, literally right up until we started getting the numbers. I was scared to death that nobody was actually going to do it. It was really, really stressful, but once I saw it happening it was the most overwhelming feeling that I can possibly describe. I feel like as a teenage girl, which I’m sure is something you can relate to, it often feels like not a lot of people are on our side. It often feels like not a lot of people care what we have to say or think that our voice has value. But feeling that validation of seeing 40000 to 50000 youth across the province standing with me and working on something that I had worked on and really working together to work on this issue that so many people care about, that was such an amazing feeling. “

Diviya: Have you ever dealt with any gender-bias or discrimination as a young woman who is passionate about STEM?

Rayne: “Yeah, absolutely, I mean honestly just the response that I’ve received is so based on my gender. I’ve worked with and talked to a lot of guys over the course of this who are on my side and so many of them have said that if if it was them who ran this they wouldn’t have been receiving any of what I have been getting. Their response to everything that I’ve done has been so overwhelmingly based in gender. People on Twitter and 4chan are out calling me a slut and a whore and saying that I should just keep my mouth shut and look pretty, and it’s so overwhelmingly based on gender. I’ve explained that I go to the best school in Toronto for advanced math and science and I plan on going to MIT for my Ph.D. in theoretical physics. There’s definitely been a lot of discrimination going down that path. It’s so difficult even for people to see me as intelligent. I feel because of how I present and how I dress and how I look it’s a lot easier I think for people to assume that I’m not intelligent because there’s a lot of stigma and a lot of assumptions that people make when they see someone who is very feminine. Often when people want to be seen as smart they think that they have to dissociate themselves from femininity in order to do that. I know that stereotype of the smart girls who doesn’t wear makeup and wears glasses and that kind of stuff, and that’s never something that I’ve identified with. I’ve always wanted to look very feminine and wear makeup and wear dresses, but also be very smart and be very successful. That’s something that I think threatens a lot of people because a lot of them have never really seen that before. I’ve literally had people say ‘you want to go into theoretical physics, but you’re so pretty” that’s something that someone has actually said to me. There’s so much gender bias, especially in physics, which is such a male dominated field and it’s really frustrating. But I think that every single woman that goes into physics or goes into science is working to make that a little better.”

Diviya: How have you dealt with any negativity or resistance towards the message you are trying to spread?

Rayne: “It has been really difficult. A lot of the time I just try to brush it off and try to make a joke out of it. But it can be really scary sometimes. I’ve gotten death threats and rape threats and stuff like that and it can be really scary, especially because a lot of them know where I go to school and have a general idea of where I live. Yeah, so it can be scary but I think that all of the hate that I’ve gotten has almost made me more resolute towards the cause. It’s made me realize how important that education is. When people’s first response to seeing a young woman use her voice is saying “I hope she gets raped”, that’s clearly a statement on the state of our education and the state of education that they received. While it can honestly be really difficult to see all and to see so much of it, it’s almost made me believe more strongly in the cause.“

Diviya: Where do you see yourself in the next 5 years?

Rayne: “I think that obviously I’m always going to be involved in activism, that’s something that I want to do for my whole life. I really hope that I won’t have to fight this fight much longer. I hope that Doug Ford will make the changes that we want him to, but I’ll keep fighting this for as long as it’s necessary. But in the next five years I’m just planning on going to university and getting my degree, and I’m hoping to be starting my master’s degree by then.”

Diviya: What actions can Ontario youth take to further your message and advocate for this issue?

Rayne: “Like I said, I honestly think that one of the most radical actions that any young person can take is just being educated and being aware and being involved in politics. You don’t have to do anything really crazy or hard to do that. All you have to do is read the news and vote when you’re old enough, that’s so important. Honestly just being an educated youth and being politically involved is so important in getting us the respect that we so badly need right now. Right now the most important thing that youth can actually do is participate in the Ford government’s consultations because they have actually opened their sex ed consultations but they’re kind of trying to hide it. They haven’t released a statement that they’ve opened it and they’re trying to spread the message that it’s only for the parents, even though that’s not true. Anybody can be involved in these consultations, and you can submit as many as you want, so it’s so important that if you care about this, submit a response every single day. Be involved in those consultations and make your voice heard, that’s the most important thing we can do right now.“

If you would like to participate in these consultations about the future of Ontario’s education, go to https://www.ontario.ca/page/for-the-parents.

Thank you so much Rayne for allowing me to ask you a few questions!